BGRC are raring to go! As autumn drew in on a successful summer for Bridport Gig Rowing Club, we celebrated some phenomenal competitive successes within the local Jurassic League and beyond and many glorious forays out for all club rowers from West Bay – even having Danny the Dolphin entertain us for an evening in October.

The club is in good shape looking ahead into the 2020 season.  Numbers in the club are strong, including a healthy uptake in our Learn to Row courses.  Of course, we head out of the harbour whenever possible but when conditions are prohibitive, you will see members either rowing on the sheltered waters within the harbour, or running, on ergos, doing weights or exercising in and around the boathouse.

This year, as a club, we have added 2 more competitive categories to our members and as a club hope to take part in some of the many rowing challenges available.  In September 2019, a crew towed Dagger to London to complete in the Great River Race on the River Thames, something many others would have loved to do – but there are a variety of challenges to tempt us this year, including one in Bermuda!  Meanwhile, it’s just days until the first non-league race of the season, the gruelling Three Rivers race, around 9km against the clock on the Rivers Tamar, Tavy and Lynher, starting and finishing under the iconic Tamar bridge. We’ll be represented by 4 racing squad crews: 2 men’s and 2 women’s. 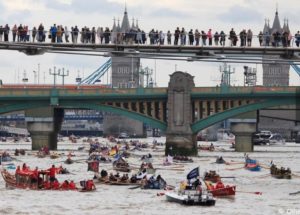 After that, it’s all systems go for the squad heading to the World Championships, taking place on the Isles of Scilly from 1-3 May, where again our men and women will be competing in a variety of racing categories and soaking up the ‘Gig-Fest’ atmosphere which takes over the islands.  Closer to home, some intra-club racing will take place during the Spring at West Bay, where members from all sectors of the club form crews  to give everyone a taster of racing – and no doubt some entertainment!

The ‘vintage’ rowers within the club are eyeing a series of Masters Races throughout the south-west, the squad is increasing in numbers and they have embarked on a weekly off-water training programme.

Our members all have their own reasons for taking part in the fabulous sport of gig rowing, but I am sure I speak for all in our respect of the heritage of the sport.  Our governing body – the Cornish Pilot Gig Association – secured a Lottery grant which enabled them to fund a project called ‘Pulling together the past’.  The aim was to capture the history of Cornish Pilot Gigs and gig rowing.  There were around 7000 pieces of memorabilia to catalogue – a massive undertaking by a small, but very keen, team of volunteers!

As a result, an excellent exhibition has been created, including a fabulous film.  We hope to bring the exhibition and film to the Salt House at some point this year, but meanwhile to whet your appetite, look at the information board on the boathouse door. Our chance to showcase our wonderful sport is on 4th July, when we host our regatta at West Bay.  Put the date in the diary, it will be a great day out for all the family.